Well folks, I find myself starting the sixth and final week of my sabbatical - people said it would fly by and it has. But what amazing weather we've had this week and some great opportunities to take more pics in the bright sunlight.

Last week didn't turn out to be as productive as I'd hoped. Firstly, looking after a three year old with the snottiest cold I've ever encountered took priority (it's strange how they can't blow their own noses!),  and secondly, even when I did manage to escape to my studio, a faulty house alarm over the back disturbed me with its incessant whirring. Grr! What makes it even more galling is that no-one even lives in the house, so I became Mrs Angry of Maidenhead and have complained to the council about it.

In between all that and some very welcome visits from friends, I did manage to finish the painting of the Water Garden at Cliveden (the National Trust site just up the road) and one of a view along a hedgerow. Here they are:

Also last week someone suggested I enter some pictures into a small exhibition in May. This turned out to be tougher than I thought because when I turfed out long-forgotten canvases and cast a critical eye over them, many seemed quite disappointing to me now. This was a bit of a shock because I remember thinking at the time that they were pretty good, but at the same time I can now see how my work has improved. Anyway, following this exercise I've decided to have a clear out: I'll sand down, prime and reuse old canvases instead of letting them take up valuable space.

Oh, there was one other thing, I now have a website where people can view my not-so-bad work. http://www.karendaviesart.co.uk

With the equinox now behind us spring is in the air, so I took advantage of the improved light to get out on Sunday and take some photos of the stunning scenery surrounding Cookham Lock, a lesser known backwater on The Thames. 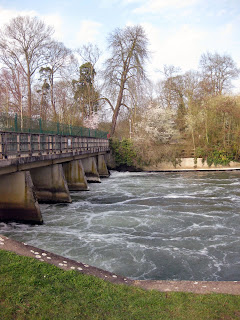 The first blossoms are appearing and with a lovely mackerel sky (I've been itching to paint one of those for ages), I'm confident that finally I've bagged some more suitable pics to work from later on. Good job too because I'm fast running out of resource material.

As for the paintings I was working on last week, I've completed 'Tall trees' and 'Big tree'. As you will see I couldn't resist adding some patches of blue sky to the latter, but I think it works.

I wanted to paint something slightly different next so I went back to look at my photos of Cliveden (alas taken on a gloomy day) and plumped for a view of the watergardens from between two unusual trees. This is the first time that I've painted water and I've been surprised at how effective the various colours reflected in the pond have been.
Another first for me is to have some giclee prints made from an original painting. The beauty of this is that you can have your work reproduced to a high quality to sell or exhibit but don't have to part with the originals; useful if you don't have a large body of work. To test the water I have chosen a big painting of some cows in Dorset to be printed on A3 paper. It's a costly process: I've had to ship the original to Bristol to be photographed professionally (using a £25,000 camera no less) and then the high resolution image can be used to produce as many prints, at any size on any type of paper, that you wish. Anyway, here is the painting I refer to and I just hope it's worth the expense!
Today I am also publishing my website, at the moment it's just a gallery, but I will be adding greetings cards and prints soon.

Posted by Art By Karen Davies at 03:55 No comments:


After a brief respite from painting trees, during which I turned to Snowdrops at Cliveden (completed pictured above), at the beginning of week four of my six-week sabbatical, I am back in the thick of it again. 'Ancient tree, Burnham Beeches' (16"x12") is now done and I am getting on with two more  paintings inspired by the beauty and variety of Burnham Beeches. One will be titled something like 'Tall trees, Burnham Beeches' and is portrait shaped for a change, while the other is called  'Big tree, Burnham Beeches', and has unusually long branches -  I'm rapidly becoming an expert on such matters, or perhaps just 'barking' mad.

Following a weekend away from the easel I came back to it refreshed Monday morning, however, I've found that I can't paint for more than an hour, so I take a lot of breaks. I could probably carry on for longer if I listened to music, but I've tried this before and have found that I lose concentration and the end results suffers.

Here are pictures showing the progress of the latest paintings. Swapping between two paintings seems to be working well. It probably helps to see faults or areas for improvement when I get away from a picture.

These two are proving quite enjoyable to paint, probably because the compositions work well, and the fact that it wasn't a lovely sunny day casting great shadows, but a dull autumn one, doesn't seem to detract from the painting, in my opinion. However, I am tempted to add some blue to the sky in the latter picture.....
Posted by Art By Karen Davies at 05:27 1 comment:

The wood for the trees 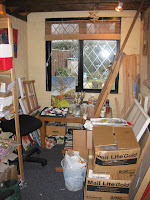 Being in the fortunate position of having a six week sabbatical, I jumped at the chance to pretend I'm a real artist for once and not just a Sunday afternoon one. So my plan is to hide away in my 'studio' (a shed in the garden, mercifully equipped with a heater), paint some decent landscapes of the scenery surrounding Maidenhead in Berkshire and then see if any of the local hospitals would like them (for free) - because apparently patients get better faster if they have some art to look at.

Well, I got off to a flying start in week one. I'd already taken photos of interesting looking trees in Burnham Beeches and had done some sketches in oil on paper before the sabbatical started so I had a good idea of what I wanted to paint first. By Friday I'd completed the first painting of a tree that I drive past everyday on my commute to work: I've called it 'Tree near the Jolly Woodman' and it's not small at 20" x 16". I say it's finished, but I think it's more a case of I've had enough of it. One thing I've learnt so far is that I don't like to spend a long time on a painting: sometimes I find that if I carry on trying to improve a painting it loses its freshness. And if a picture is not working I usually find it difficult to turn it around. In fact, the studio is chocker with what I consider duds. 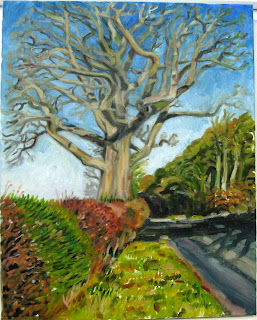 But I digress. From painting 1, still in week one, I moved on to two more tree paintings, this time set in Burnham Beeches. These two are smaller than the first at 12 x 10 inches and include a rather ambitious close up of the bark of one tree which has an amazing pinkish/lilac hue which inspired the title 'Pink tree in Burnham Beeches'. The other tree I chose because of the curious shapes it makes, spreading out widely from its base, the branches reach out in a variety of trajectories. Anyway see for yourself. 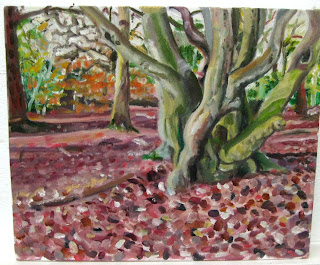 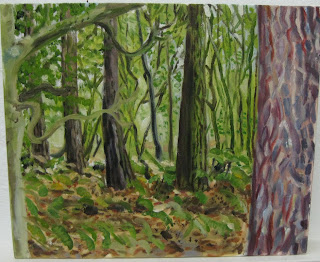 By week 2 I already felt like I needed a break from trees! Not a good sign considering I had envisaged painting a lot of them. But for sanity's sake I opted to paint a statue of two figures found at Cliveden, then leaving this unfinished I moved on to tackle Snowdrops at Cliveden (16"x12"). 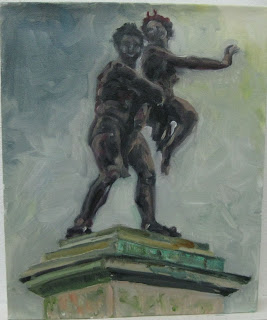 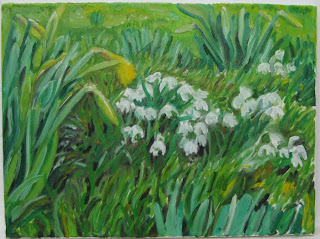 This really did refresh the palette (ha, a pun too!) and I found that I was ready to start another tree painting without feeling tree-sick. So the sixth painting (unfinished) is titled 'Ancient tree, Burnham Beeches' (16"x12"). 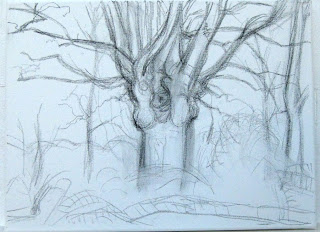 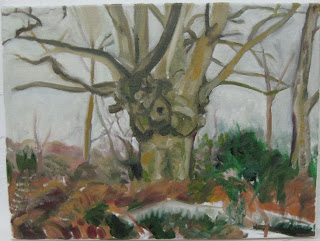 I am now beginning week three and feel quite relieved that I have some work behind me already but will have to get some more photos to give me a range of options for compositions, perhaps some fields? That would be a first for me. Although I'm feeling more relaxed now that I've done some paintings, there remains an anxiety about whether anyone will want them. Up until now I've painted what I like, for myself, now it's got to be fit for public consumption. But in the meantime I'm determined to at least enjoy the process, even if it comes to nothing.
Posted by Art By Karen Davies at 03:03 1 comment: