My first solo exhibition finished last Saturday after three weeks. But I must admit that it wasn't a rip- roaring success. Don't get me wrong, there were some highlights; for instance, there was a good turn out of friends for the preview and overall I sold quite a few greeting cards and postcards, but most importantly of all, I didn't sell any paintings. And since that's really the point of holding an exhibition I was rather disappointed. I know not all of the pictures were for sale but of the ones that were, I thought I would sell at least one.

I've gone over things to see if I could have done anything differently. I don't think there was anything wrong with the paintings themselves – the feedback I had about them was good – and I don't think they were over-priced either. In the end it all comes down to numbers. I guess the main reason I didn't sell any pics was because there weren't enough visitors. When I was stewarding on a Saturday, for example, I was getting an average of eight people through the door. It's just not enough. There were posters outside to advertise the gallery but I suspect that people associate the building with its primary use, that of being a day centre for old people, and therefore don't take it seriously as a gallery. This is a shame because the light and space inside is superb for showing pictures. Anyway, with hindsight, I can now see that I needed to do a lot more to promote the exhibition. There was a brief mention of the show in the local newspaper, the Maidenhead Advertiser, but no photos accompanied the copy. The photo below gives you a sense of what it was like to steward my show…


Being able to meditate would be a perfect way to get you through times like these. I'm still glad I did the exhibition, though. I got to show the work I created on my sabbatical and I met some other local more experienced artists, such as Many McAllen and Gail Dorrington. In fact Gail was just setting up a group for Maidenhead artists on facebook to share information, so I've joined that. It's all part of getting out there as an artist and learning from experience.

Oh, by the way, I did sell one painting during this time - one that was hanging in my kitchen. It's a painting of some ducks which I did a few years ago but only recently got framed. A friend spotted it and made me an offer. Here it is:

Now the exhibition is over I will be donating the following three paintings to Thames Hospicecare:

Since my last blog I have been working on a still life of three mackerel on a plate, which I have just finished. Below is a series of photos to show how the piece progressed (people say they like to see the work in progress, so I'll carry on with this). I enjoyed painting this; the colours of the fish are beautiful even working from a photo. Which reminds me, while I'm on the subject of sea creatures, I would also like to paint a crab some day. I was inspired to buy one after seeing Angela Harnett prepare crab linguine on the telly for a series called the Great British Food Revival. Before boiling and smashing the crab to pieces I was struck by what an interesting subject it would make for a painting, so I plan to pay the fishmongers another visit soon. I also spent a week in Croyde Bay, north Devon, in early August and would like to try my hand at a seascape. Efforts in years gone by haven't been too successful, but I'm going to give it another go. Will have to check how good my snaps are first, though. 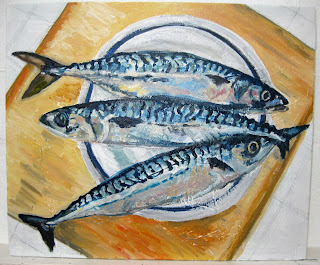 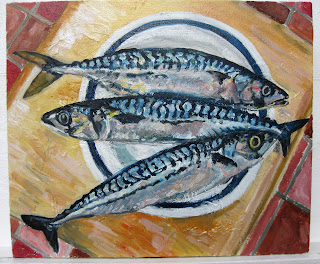 Lucian Freud died since I last blogged. What a great artist he was. He became my favourite painter after I first saw his work at the Hayward Gallery on the Southbank in the late eighties; I was fascinated by the way he painted flesh and the intensity of his work. I've followed his career ever since and poured over my books about him. Now he's gone, the retrospective of his work next year is going to be very popular indeed! I'll be there, that's for sure. And I'll definitely be scraping the pennies to see if I can afford the catalogue.
Posted by Art By Karen Davies at 14:59 No comments: