I thought it was high time I let people know what arty things I've been up to over the past few months, and it's not as much as I'd like it to be. But enough for a blog at least.

Anyway, first up in May was my second time participating in Maidenhead's biannual
Art on the Street event. This time the sun shone and we had local musicians gigging up and down the high street for added entertainment. I didn't sell any of my pictures - just a few cards - but I was proud to be part of the growing artisan movement that the event's organiser Marie-Anne Leonard is trying to generate in the town. She has big plans for Maidenhead and I'm sure, with her enthusiasm and energy, she will succeed in revitalising the high street. Hopefully I will get my work into one of the many pop-up shops Marie-Anne is now setting up. Perhaps someone else will be more successful at selling my work!

Back to painting, then. I've only managed two oil paintings of late. The first was the last of many chicken paintings I've done. This time, instead of focusing on one or two birds I've opted for a group composition. The following photos show how the work progressed: 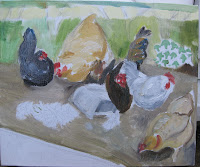 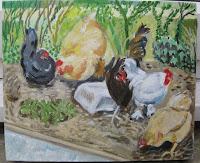 The second painting came about after being invited to take part in an exhibition at Elizabeth House in Cookham to celebrate the Queen's Diamond Jubilee. I decided to paint a Corgi being walked by Her Majesty - anything to get away from all that red, white and blue. I didn't have much time to work on the picture before it had to be handed in for the show. In fact, it was still wet when I did turn it in. Oh well, it will be dry by the time the exhibition ends in five weeks' time (it opened on Saturday 16th June). Here's the painting:


So, this picture is being shown along with Jubilee-inspired artwork in a variety of media by 15 other local artists. Pop along to Elizabeth House one Saturday to check them out, they're all for sale too.
This week I've been inspired by David Hockney's charcoal drawings in 'A Bigger Picture' to get back to doing some sketching. It's an area that I've neglected as I tend to sketch straight onto canvas and then paint. It's good to get back to basics, though, and should help improve my painting.
Bye for now...
Posted by Art By Karen Davies at 14:47 No comments: