Happy Christmas, dear reader! A friend commissioned me to paint a landscape for her partner. It was  a Christmas present so I can only hope that it was well received – after all, art is subjective so it might not be to his taste at all. My brief was to use the photo (below) of somewhere in the Cotswolds, supplied by my friend, as a basis for the painting. Then, as Martin Gayford puts it in his introduction to A Bigger Message: Conversations with David Hockney (2011), I set about doing what all artists attempt to do 'make the world around us seem more complex, interesting and enigmatic than it usually appears'. 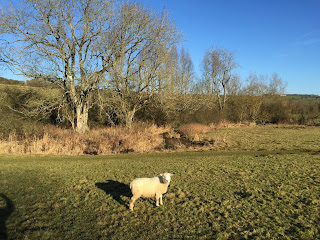 My first thought was that the sheep looked rather lonely, so I sourced another one to give it some company. In the end I used one of the sheep in the foreground of a painting I admire very much, titled 'Strayed Sheep' by William Holman Hunt (1852). The posture of the animal added a bit of drama to the piece - in the original painting it is perched on a cliff edge, but for this painting I inserted a tree trunk in the bottom right hand corner of the canvas. I also decided to accentuate the undulations of the hills in the background.

After blocking in the colours and main forms I set about adding more detail and layers paint. You may feel as though this is a bit like spot the difference, but the following pictures show the gradual development of the painting. 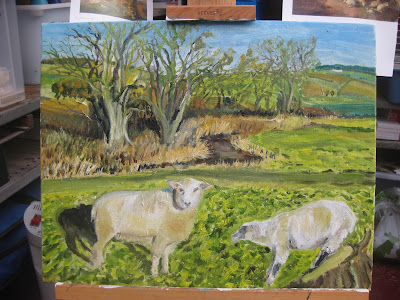 And here is the end result:

My next painting is of a couple of my chickens in the snow last winter, so I'll be back to show you how that turns out, and hopefully many more in 2016.

Posted by Art By Karen Davies at 10:17 No comments: