My art cup well and truly overfloweth of late with 'blockbuster' exhibitions of my two favourite artists - David Hockney and Lucian Freud. I've been so impressed with Hockney's Yorkshire landscapes that I even bought the book to accompany the exhibition, A Bigger Picture, and intend to visit Bridlington one day, to see the source of his inspiration. I admire that he never stands still artistically, but is always trying new ways to depict his environs; be that using the camera obscura, photography, watercolours or even an iPad. Generously, he passes on what he has learnt on this quest to fulfill his own curiosity. One nugget of wisdom I found interesting was what he said he learnt from the Chinese approach to art: 'They say you need three things for paintings: the hand, the eye, and the heart. Two won't do' (Gayford 2011). So that's where I've been going wrong!

As for the Freud exhibition, simply titled 'Portraits' at the National Portrait Gallery, well, it's brilliant. The work on show spans seven decades, from when he was a student in the 1940s through to the unfinished painting of his assistant David Dawson and Eli (a whippet) called 'Portrait of the Hound'. It was poignant to see the last brush strokes this great artist ever made. After reading the book by Martin Gayford about his experience of sitting for Freud, 'Man with a Blue Scarf', it was exciting to see the painting for real. It's a very engaging portrait. However, I had a chuckle when I saw they were selling blue scarves next to the book in the gift shop. Those marketing people don't miss an opportunity! But the proceeds go to the gallery, so I hope they sold loads. And the hand-rolled felt whippet for £65. All in all, though, I came away with even more admiration for Freud's work, because what really came across was the utter power of his scrutiny and his dedication.

Anyway, back to my offerings. In between family life I have managed to get three paintings done in readiness for the next Maidenhead Art Market on the 12th May. There are two chicken paintings and another version of a fox painting done last year. Here follows the progression of the first one, called 'Golden chicken': 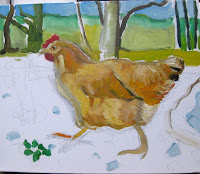 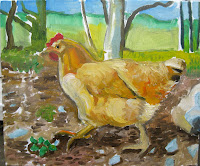 Next up is 'Two chickens' (which isn't strictly true, because there is a third one in the background walking away): 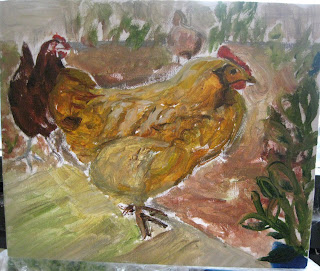 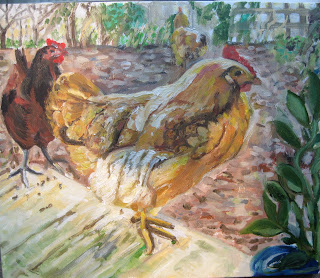 
In preparation for the market I decided to get some of giclee prints framed. Rather than go to a shop,  I tried a framer online to cut down on the cost. I'm pleased I did. By uploading jpegs of pics to their website you can try out a range of frames and mounts to suit the image, the delivery was efficient and the product top quality. So I'll be a returning customer for sure. Now I just need to sell the prints…